Twilight. Love it or hate it, it’s hard to deny its influence on Young Adult Fiction. Twilight, by Stephanie Meyer, was released in 2005 and I have a personal theory that Twilight’s initial success was largely due to its striking cover art.


Break-down of Twilight’s cover art
The cover art of Twilight is deceptively simple, and therein lies its strength. Covers are billboards; they shouldn’t be complicated.

All the elements of the cover reinforce each other, leading to a hugely powerful combination.

Does the cover match the contents?

So is the cover a fair representation of the book’s content? The dramatic symbolism and colour scheme might seem overly melodramatic for what is perhaps the commonest romance story in existence: girl meets mysterious, beautiful stranger and falls in love. However, Twilight’s content could also be described as overly melodramatic – part of its appeal to a teen audience is in its exaggerated emotional atmosphere. The cover encapsulates this mood perfectly.

Covers within the Twilight Series

There are four books in the Twilight series and they all have very similar designs. The colour scheme remains the same for all the covers, with only the central image changing. The images chosen for the rest of the series carry less symbolism than the original Twilight cover and appear to have been chosen more for aesthetic appeal than for any deeper reason.

Twilight has generated a trend of young adult novels that mix melodramatic love triangles and teen protagonists with supernatural elements. These books make themselves easy for Twilight-fans to find by echoing design elements from Twilight’s iconic cover. Below I’ve analysed some examples.

Vampire Diaries by L. J. Smith is particularly interesting because it was published over a decade before Twilight, but the Twilight - fuelled paranormal craze was clearly seen as an opportunity to re-issue this series. The new cover is clearly intended to echo Twilight, but the additional elements suggest that this novel is darker or more gruesome than Twilight.
Here are some other YA covers clearly influenced by Twilight, using one or more of the following elements: 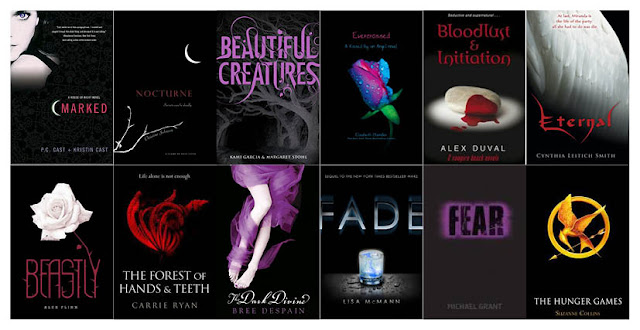 And I also present the following, in the ultimate attempt to draw Twilight fans to the classics:

I'm all for encouraging people to read classics, but marketing these as 'just like Twilight' is very misleading. I think the melodramatic cover is particularly inappropriate for Jane Austen's Pride and Prejudice. Also, Romeo and Juliet is a PLAY, not a NOVEL!

Updated 12 May
I took this photo yesterday, and it shows the influence Twilight is continuing to have on YA covers. Just look at all that black! 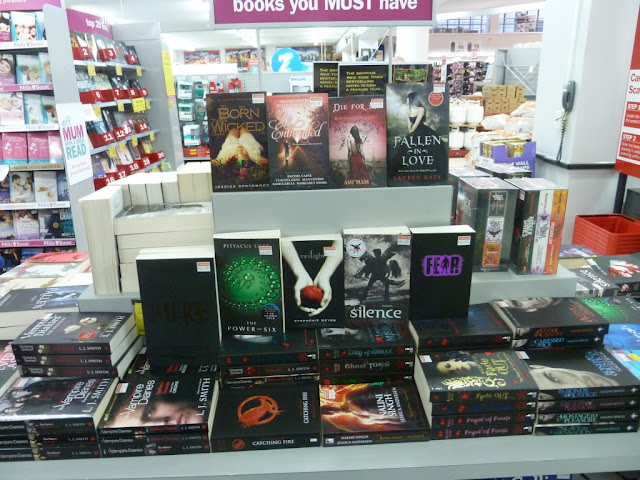 I also realised that black covers are problematic from a purely practical point of view; they collect dust and fingerprints very easily. 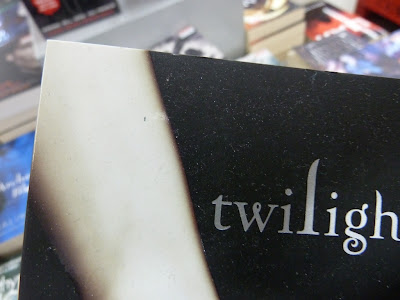